Mac: Any version of Mac OS between 10.9 Mavericks and 10.15 Catalina using Intel processor (not Apple silicon or Arm M1 based). PedScope for Mac is a 64 bit native 'Cocoa' application.

In terms of disk space, the PedScope is not especially demanding, using typically 20-40Mb.

PedScope loads and manipulates your source data in main memory.

With large data sets PedScope can use a LOT of memory and it is important you are aware of its memory requirements. 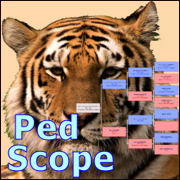